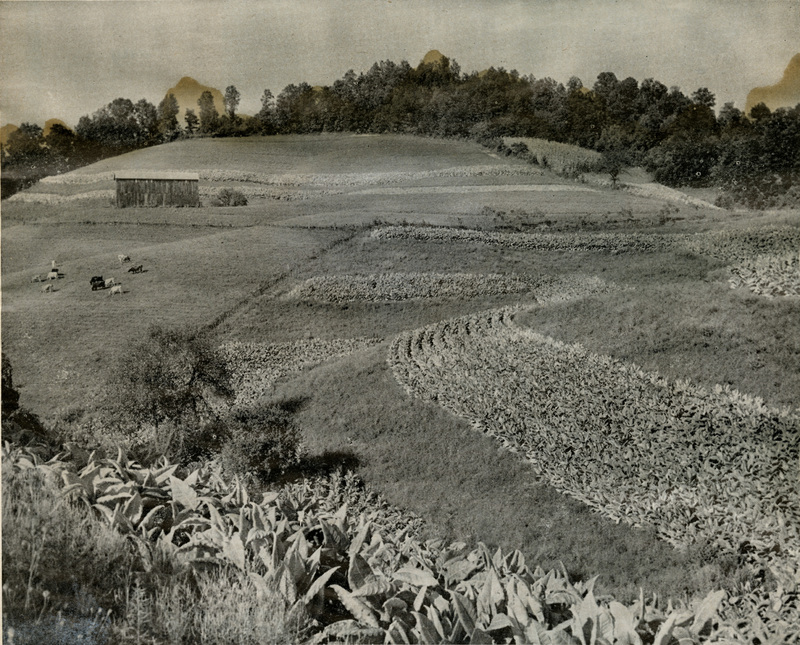 A photograph of Reverend L. A. Zimmerman's farm in Madison County, North Carolina. Image taken from the August 1946 issue of the Farmers Federation News.

What is the most valuable item in the image above? Is it the tobacco plants? Maybe the cattle? What about the fences or the barn? If you noticed the title of this tour stop, you probably know that the "correct" answer is the soil.

Indeed, even though the soil isn't visible in photograph, it nevertheless anchors and helps produce the things that we can see. During the era represented in this virtual tour, farmers understood the importance of both protecting their soil and of improving it.

Read on or return to the Virtual Tour Map.

Table indicating the approximate acreage in various slope categories across the counties of western North Carolina. From the Farmers Federation News, August 1953.

By the 1920s, European methods of farming had been operating for many generations. In some places, farm soils had become emptied of nutrients or washed away altogether. After the Dust Bowl, the conservation of soil became a popular issue. Farmers in western North Carolina joined national efforts to keep the soil in place. This was particularly challenging on mountain farms, where flat land was rare. 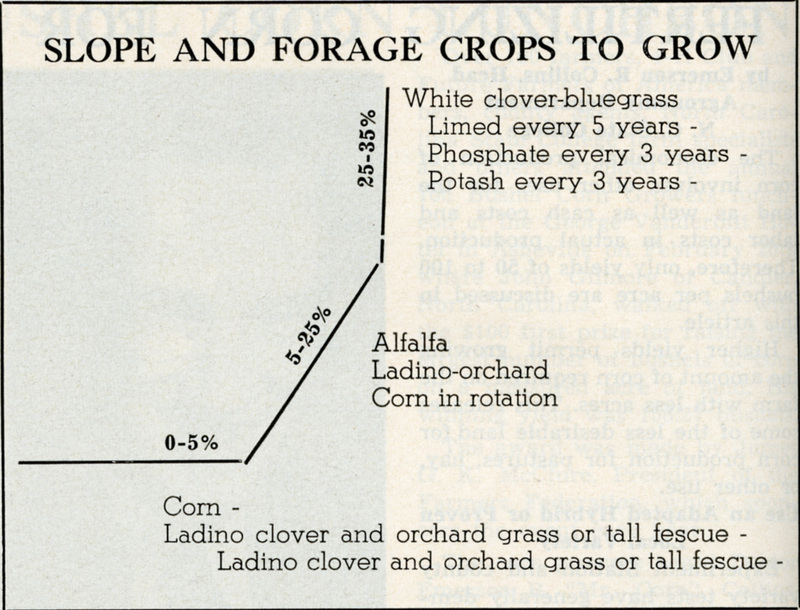 To hold the soil in place and decrease erosion, the Farmers Federation advised farmers to consider the slope of their land and to vary their use of land based on its slope:

From the Farmers Federation News, May 1937.

Land with slopes greater than 35%

Though steep lands were sometimes cleared of trees and then plowed and planted, exposing the soil in this way almost guaranteed significant erosion. To protect against such soil loss or to restore damaged land, the Famers Federation recommended that land with slopes greater than 35% should be maintained in permanent forests. The article to the right recommended locust trees as an excellent choice for reforestation efforts. And as the page on A Farm's Forests makes clear, the Federation recognized that woods were valuable to a farmer in many ways, including their ability to hold soil in place and to prevent rainfall from rushing quickly down bare slopes.

From the Farmers Federation News, November 1946.

Permanent pastures of white clover and bluegrass could be established and maintained on land with slopes between 25% and 35%. As long as a farmer could clip the pasture to help control weeds and spread lime to help the legumes grow, this land could be used to pasture herds of cattle and sheep. The article to the right describes the pastures of Miles of View Ranch--a farm in Sylva with elevations as high as 5,400 feet and much sloping land.

From the Farmers Federation News, November 1957.

Moderately sloping land could be managed carefully to produce hay and other forage as well as tobacco and corn. To achieve this varied production while protecting the soil against erosion, the Farmers Federation advocated for the use of contour plowing and "strip cropping." This practice created fields that looked striped: between the stripes that had been plowed that year to seed in a tobacco or corn crop, the farmer would keep a stripe in grass. This sod would check erosion and prevent the formation of gullies. Coupled with crop rotation--following a planned succession of crops over a period of several years--strip cropping helped hold the soils of western North Carolina farms in place.

Reverend L. A. Zimmerman of Madison County appears to have been something of a strip-cropping celebrity. Zimmerman wrote an article on "Hillside Alfalfa" for the October, 1945 issue (see the second-from-the-left image in the gallery below). The News also included an image of his farm on page 1 of the August, 1946 issue (see the image at the top of this tour stop) and an article about his use of strip cropping in the same issue (see the third-from-the-left image in the gallery below). 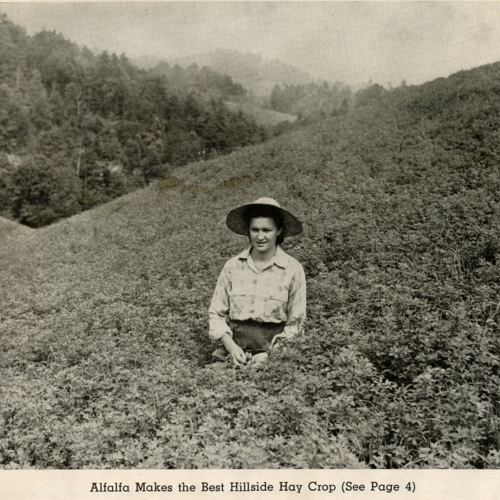 From the Farmers Federation News, September 1945. The caption identifies this as a photo of "Miss Robena Ramsey, 17, in her father's alfalfa at their home, on Big Laurel, Madison County." 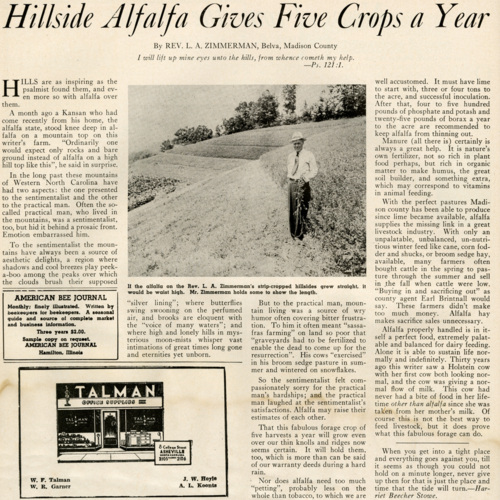 From the Farmers Federation News, October 1945. 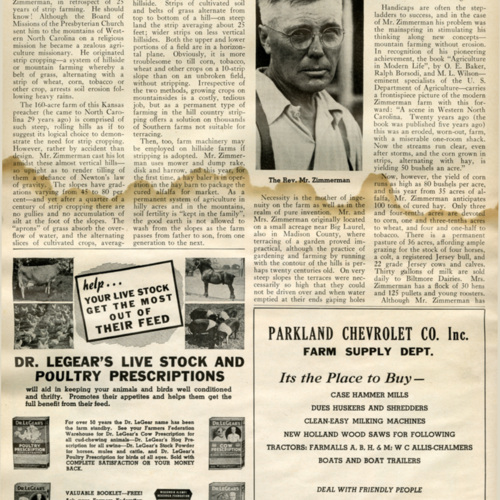 From the Farmers Federation News, August 1946. 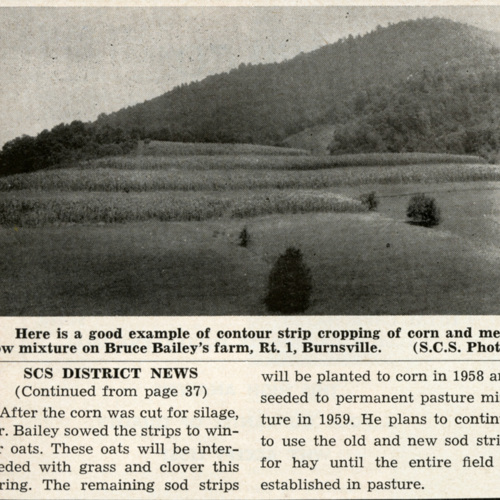 From the Farmers Federation News, March 1957. This image displays the way that farmers used "strip cropping"--maintaining strips of perennial grass sod between strips that had been plowed and planted to corn, tobacco, or some other annual crop--to mitigate the risk of erosion. 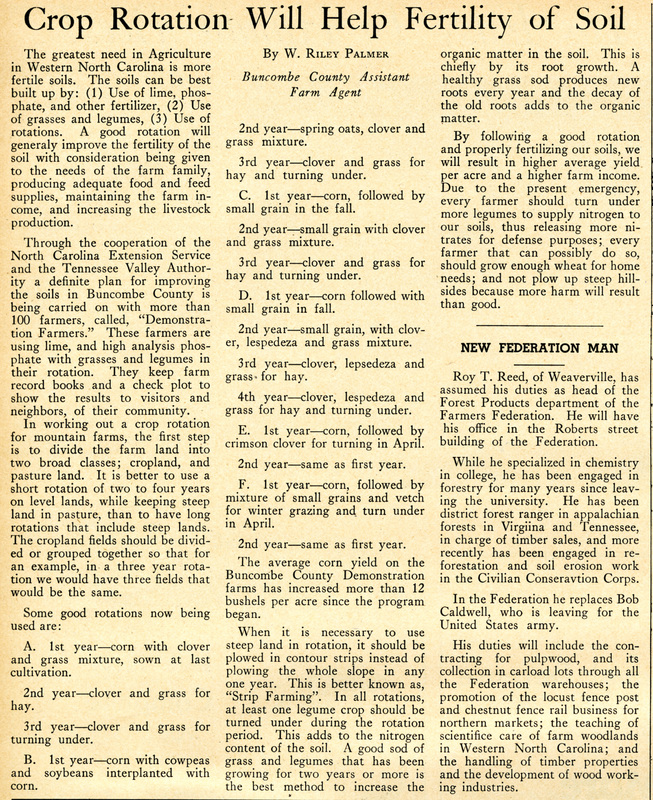 From the Farmers Federation News, April 1942.

Land with slopes between 0% and 5%

Flat land is less common than sloping land in western North Carolina. Most farms, though, had some land with minimal slope along the banks of creeks or rivers. This generally rich land could produce excellent crops. Farmers might be tempted to grow a cash crop like tobacco on their flat lands year after year after year, but the Farmers Federation recommended rotating crops on land with slopes between 0% and 5%. The article to the right outlines multiple rotation sequences.

Farmers also worked to improve the richness and fertility of their soil. 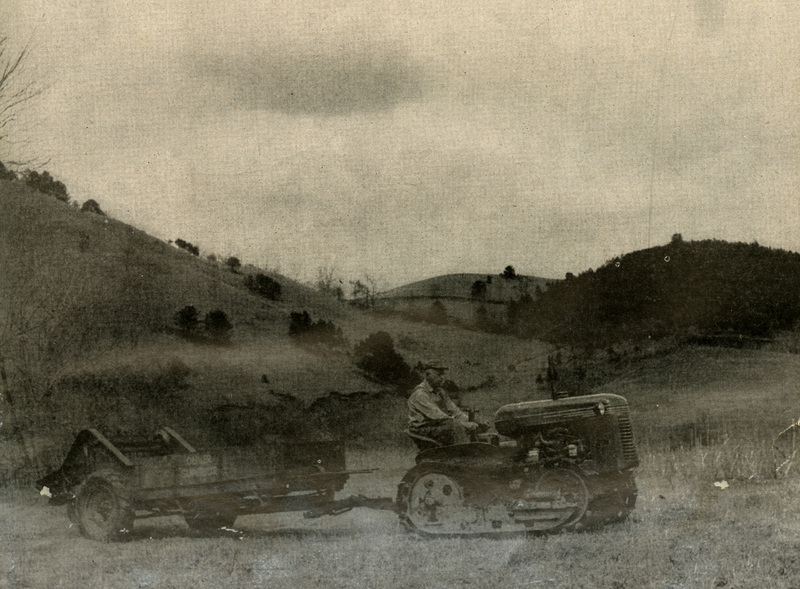 From the Farmers Federation News, March 1952. The caption identifies this as a photo of "Tom Ray of Star Route, Burnsville, with his new Oliver Crawler tractor and Oliver Manure Spreader."

From the Farmers Federation News, February 1922.

The News encouraged farmers to not only prevent erosion, but to also build up the quality of their soil by spreading animal manure, growing and plowing under cover crops, and by using lime and fertilizer to ensure that the soil pH and nutrient profile were correct.

In a July 1943 article, the News discussed how W.M. Lance used these techniques to  "build land" and restore a diminished farm. See below. 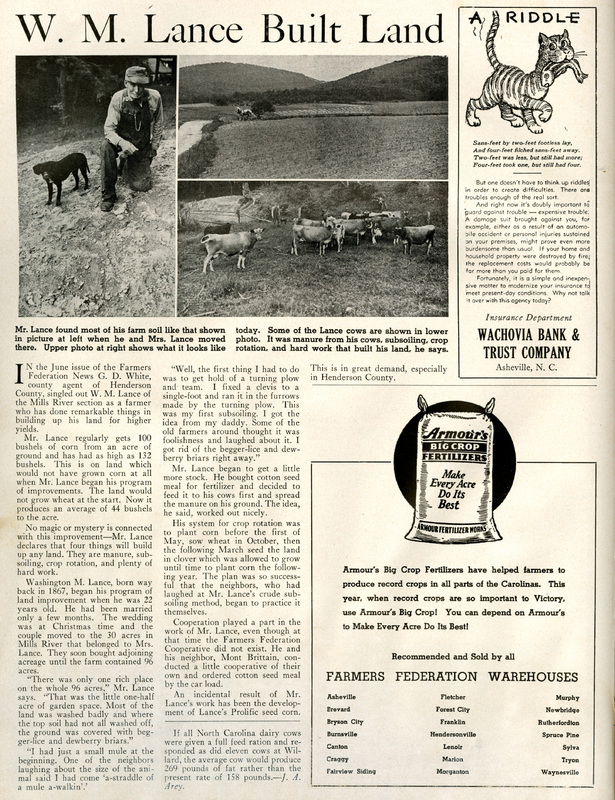 From the Farmers Federation News, July 1943.