The Forest's Many Gifts

In Southern Appalachia, a farm was more than its fields, animals, and buildings. The woodlots and forests were also an important part of most farms. According to the April 1937 issue of the Farmers Federation News, "more than half of the land in the average mountain farm is in woods." That acreage was not "idle" or "waste," though. Instead, the forested acres provided many resources.

Livestock, especially hogs, could be turned loose in the woods to fatten on acorns and other mast crops. Farmers might hunt wild game to add more meat to their tables. Lumber was a vital building material. Wood could also be burned for heat and the ash provided soil nutrients and a key ingredient for soap. Some people also gathered roots and herbs to sell.

Food and Drugs from the Forest

Without a grocery store, pharmacy, or supermarket nearby, could you find food and medicine? During the first half of the twentieth century, residents of Western North Carolina made much more thorough use of forest land. In and among the trees, they found food and medicinal plants like ginseng and black cohosh.

In his memoir (It Used to Be) Bascom Lamar Lunsford recalled that "The mountaineers know a great deal about the medicinal qualities of these plants, and they call them home remedies" (65). 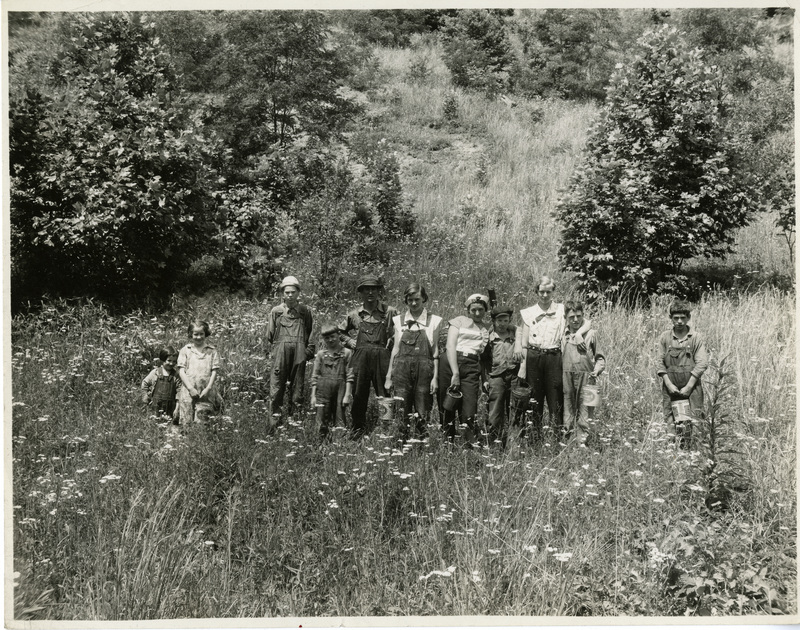 Berry pickers pose after gathering fruit. Fields beginning to grow up in trees and briers (like the one in the background) still supplied calories. Image from the McClure Photographs collection. 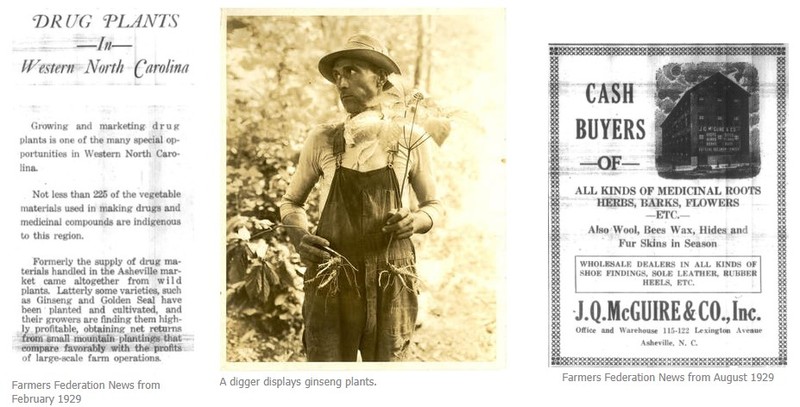 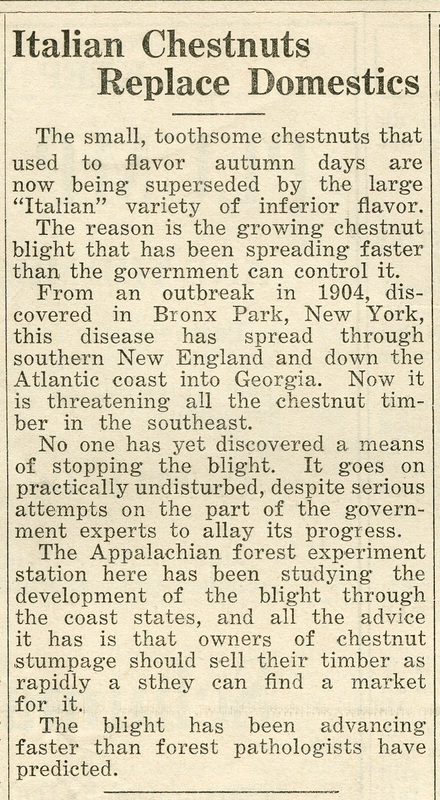 The story of the American Chestnut illustrates just how integral the forests of Western North Carolina were to agricultural life.

At the beginning of the twentieth century, Chestnut trees "comprised roughly 20 percent of the entire forest in the southern mountains" (Davis 177). In addition to the sheer volume of Chestnut trees, the species was also incredibly valuable. The tree provided rot-resistant rails for fences and lumber for buildings. The bark was used in the leather tanning process. The nuts themselves could be used to fatten hogs or could be gathered and sold. Bascom Lamar Lunsford recalled that the chestnuts were "the sweetest meat a boy ever tasted" (It Used to Be 29).

The blight arrived in the United States in 1904 and quickly made its way into the Southern Appalachian Mountains. By 1924, the Farmers Federation News was reporting that American chestnuts were being replaced by nuts from elsewhere in the markets (see the article to the right).

The title of an article in the August 1928 issue of Farmers Federation News--"After the Chestnut What?--signals the way that many folks had accepted the inevitable demise of the Chestnut and were concerned about what the world would look like without such an important tree species. Clicking the thumbnail below will take you to the article.

Such concern was well founded: the chestnut blight brought with it the conclusion of an era in the Southern Mountains. Environmental Historian Donald E. Davis writes, "the death of the chestnut symbolized the end of a waning, albeit vital subsistence culture in the Southern Appalachians" (184). 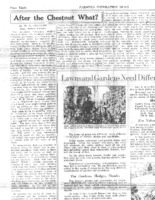 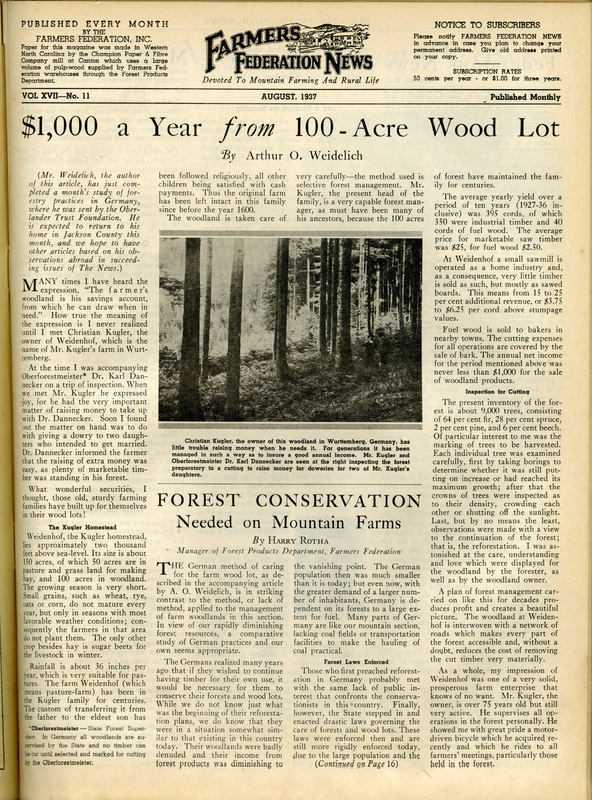 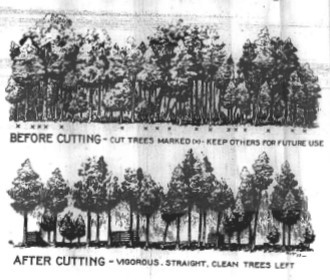 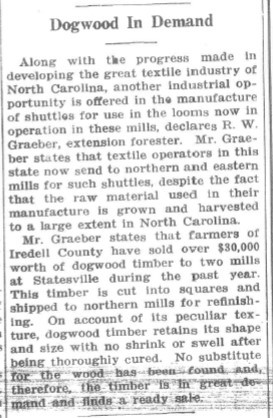 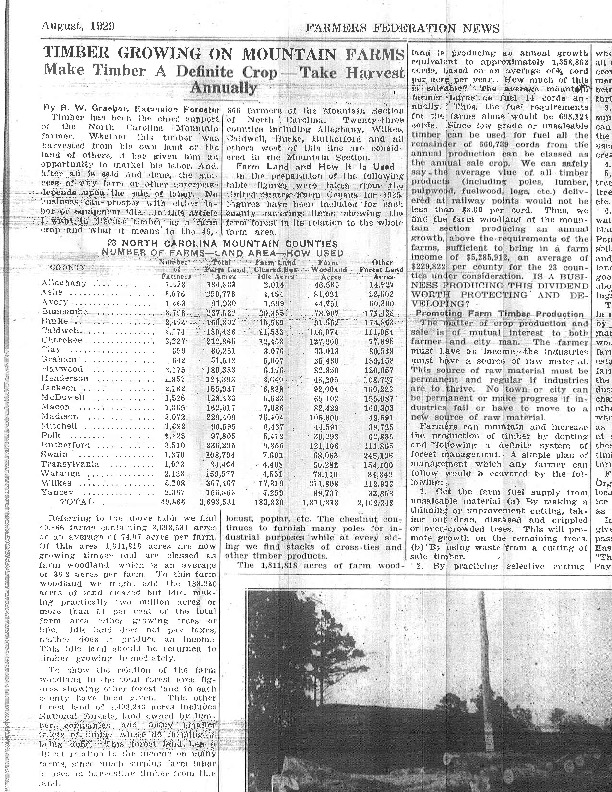 Farmers Federation News from August 1929. This article includes a table indicating how many forested acres could be found in several western North Carolina counties.

← Tobacco: Field, Barn, and Market
The Bee-Yard →
A Farm's Forests