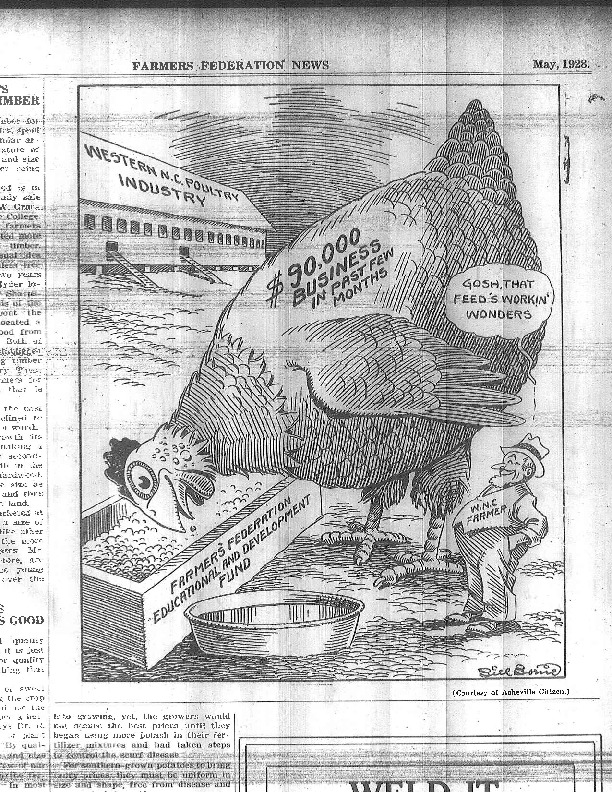 Farmers Federation News from May 1928.

Though they are enjoying something of a comeback in backyards and on homesteads today, chickens were once found in far more places than they are now. Because they are very good at producing high-protein food in the form of eggs and meat, chickens always had a place on farms in western North Carolina.

During the first half of the twentieth century, the Farmers Federation encouraged farmers to increase the size of their flocks so that they could produce enough eggs and meat to sell. As early as 1921, the Federation was describing chicken coops and poultry houses as "gold mines." Later, the Federation used the motto of "100 Hens on Every Farm" to encourage more farmers to raise poultry.

By 1928 the Federation was proud enough of its positive impact on the poultry industry in the region to produce the cartoon at the left which claimed "$90,000 Business in Past Few Months."

The Farmers Federation described the chicken house as "a valuable piece of farm equipment" and argued that as such the building "should be carefully constructed" ("For Your Chickens" in June, 1925 issue).

To help, the Federation frequently published blueprints and diagrams like the ones below. 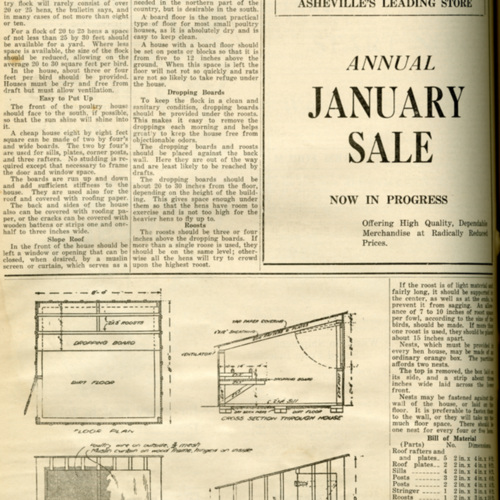 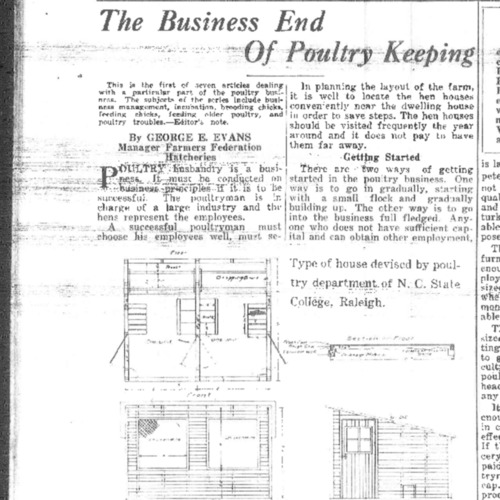 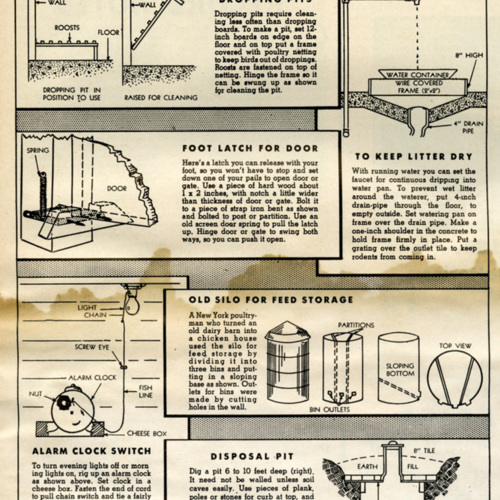 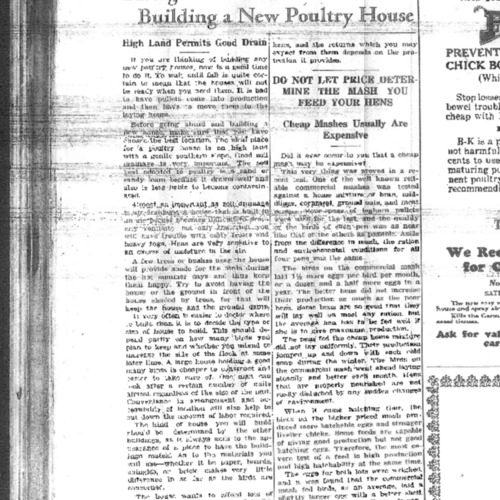 Eventually, the News would feature and celebrate large, multistory poultry houses made of cinder blocks like the one below. Structures like this can still be found in the region, but few if any house poultry any longer. 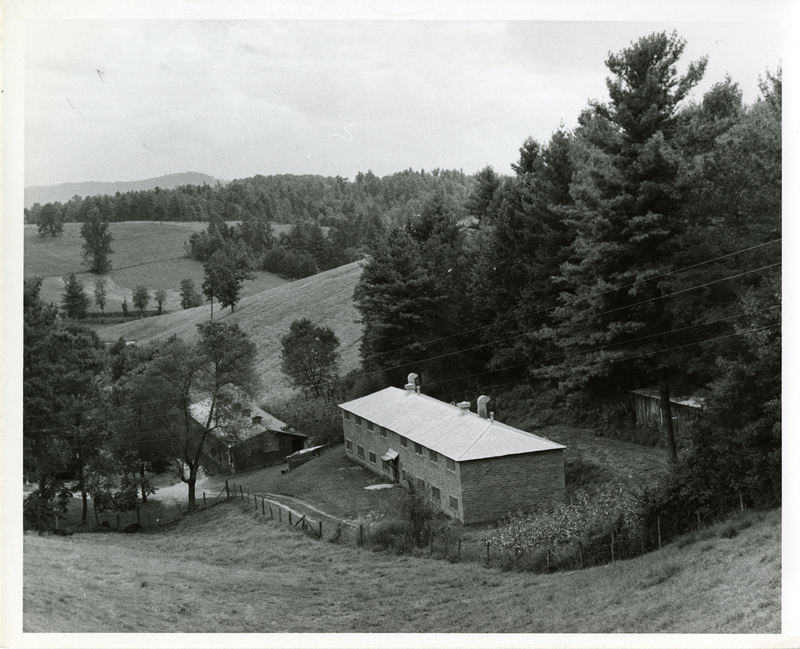 Image from the McClure Photographs Collection.

Though the Farmers Federation encouraged farmers to scale up their poultry operations and invest in new structures, this wasn't always possible. Part of what made chickens so appealing, in fact, was the ability to house them in a wide variety of structures. Realistically, any building could be "poultry house" as long as it kept the chickens safe from predators, including the "2-legged fox" that Os Deaver menioned in a diary entry for December 1889:

"John Wright, Ben Os and myself went to look from some stray turkeys we had out, but found them not. We guess a 2-legged fox eat them. . . ."

The gallery below includes several images demonstrating the range of structures that could be used as coops. 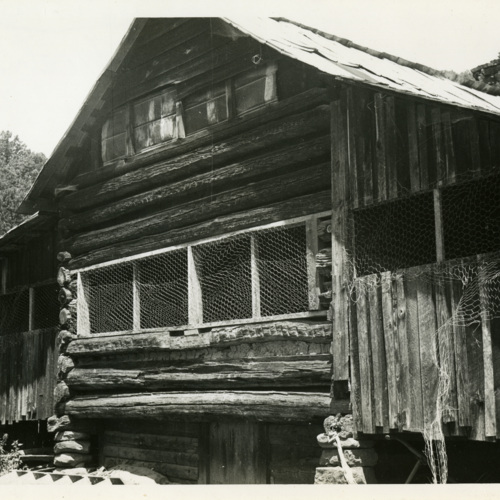 A larger barn with chicken wire used to keep out predators. Image from McClure Photographs Collection. 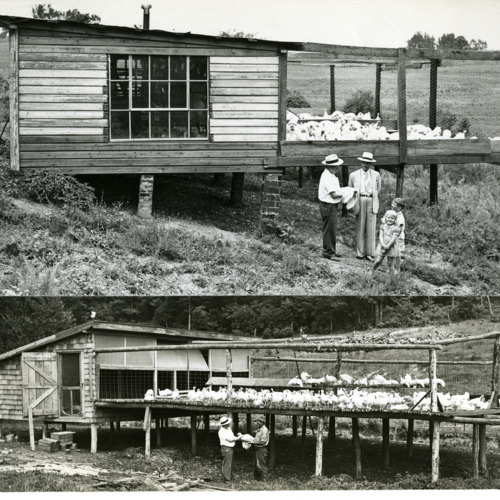 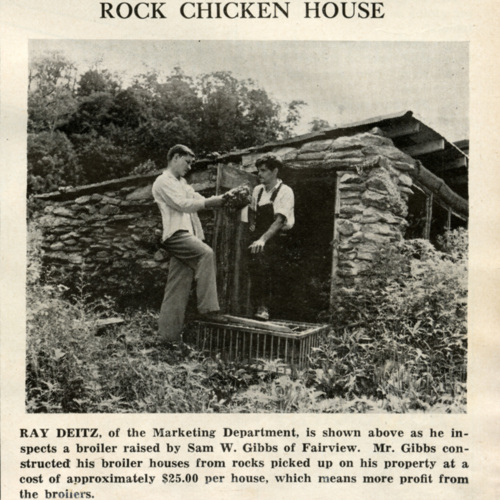 A chicken coop built out of stone. Farmers Federation News from September 1948. 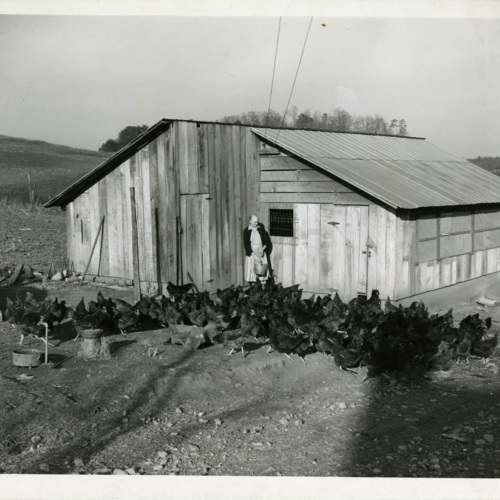